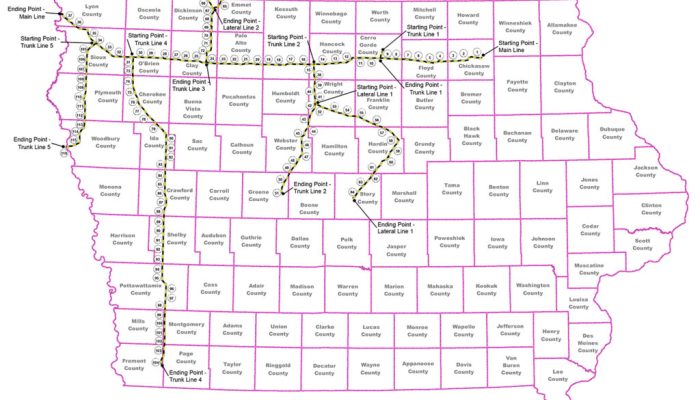 A land surveyor for Summit Carbon Solutions faces a criminal trial in December for allegedly trespassing on land in northwest Iowa that is part of the company’s proposed carbon dioxide pipeline route, according to court records.

State law allows the land surveys — without the threat of a trespassing charge — after hazardous liquid pipeline companies hold informational meetings about the projects and send notice to landowners.

The surveys are meant to help determine the path and depth of the potential pipelines.

“For now, we’re on the side of the farmer because I don’t know who’s been notified and who hasn’t, and it’s their property,” Dickinson County Sheriff Greg Baloun said. “If you’ve been asked to leave, you’re supposed to leave, otherwise it’s trespassing.”

The criminal charge stems from an attempt to survey farmland east of Spirit Lake in August, court records show.

Jeff Jones, a nephew of the landowner, has farmed that ground for decades. He raises crops and cattle with his two adult sons.

Jones worries that the pipeline — which would cut about a mile-long path through the property — will disrupt drainage tile in the fields and hamper crop yields. But that’s not the main issue.

The threat of eminent domain looms for scads of landowners across the state. Summit seeks to build about 680 miles of pipe in the northwestern half of the state that would transport captured carbon dioxide away from ethanol plants. Two other companies want to build similar pipelines.

It’s possible that unwilling landowners will be forced to grant the companies easements to install and maintain the pipelines. Summit has said it has voluntary easement agreements for about half of its route.

Summit wants to hold a final hearing on its pipeline permit in March, according to its proposed schedule to the Iowa Utilities Board, which decides whether to issue a permit and grant eminent domain requests. The company seeks a final board order in June.