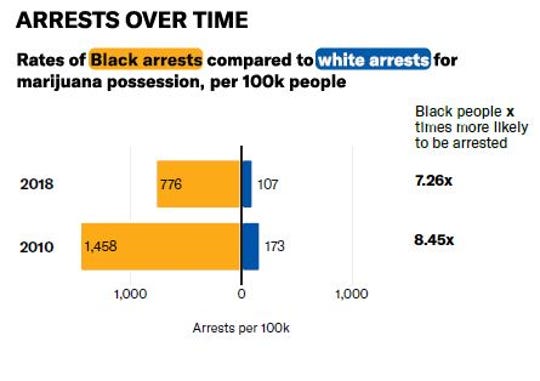 As an increasing number of states have passed marijuana legalization and decriminalization laws, the American Civil Liberties Union says one thing hasn’t changed with the times: the racial disparities of marijuana arrests.

In a report released Monday, the ACLU says black people are 3.64 times more likely, on average, to be arrested for marijuana possession than their white counterparts, even though studies show both groups use marijuana at nearly the same rate,Veronica Fowler of the ACLU wrote in a release of the report.

The state ranks fifth-worst on the ACLU’s list for racial disparities involving marijuana arrests. Only Montana, Kentucky, Illinois and West Virginia have wider disparities, according to the data used in the report.

In 2013, a similar ACLU report ranked Iowa first in the nation for such racial disparities; at the time, black Iowans were 8.34 times more likely than white Iowans to be arrested for marijuana possession.

The severity of racial disparities varies by county, the ACLU reported. While black Iowans are 4.1 times more likely than whites to face a marijuana arrest in Polk County — that’s only slightly above the national rate of 3.64 — other counties are considerably higher.