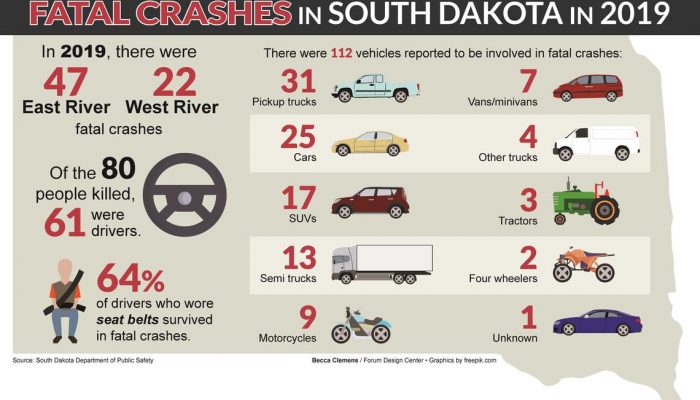 Fewer people died in crashes in 2019 than in any other recent year in South Dakota, but the state still lags behind the rest of the country in its implementation of road safety laws.

Last week, Advocates for Highway and Auto Safety, a nationwide organization that promotes the passage of federal and state laws as a means of preventing crashes, released a report that ranked each state by how closely its laws matched those the organization recommended, including those related to age restrictions, seat belt and car seat usage and distracted driving.

The report found that South Dakota currently has two of those 16 recommended laws in place, fewer than any other state in the country.

“With only two of the laws passed that we recommend, I think South Dakota, right now, is at the bottom of the list,” said Tara Gill, Advocates’ senior director for advocacy and state legislation. “You could look at that negatively, or you could say there’s a ton of opportunity to improve South Dakota’s traffic safety and protect its citizens, plus its visitors.”

However, the state has recorded a steady decrease in the number of crash fatalities, all while the number of miles traveled by vehicles in South Dakota has steadily increased in the past decade.

Read the full story at Informum