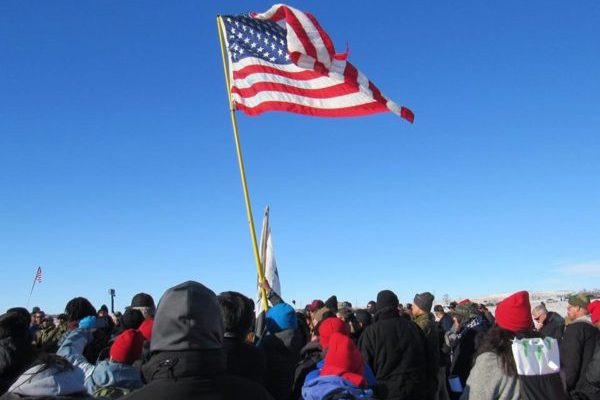 South Dakota officials have agreed to walk back parts of the state’s new anti-protest laws that opponents say were meant to target Native American and environmental advocates who speak out against the proposed Keystone XL crude oil pipeline.

Gov. Kristi Noem and state Attorney General Jason Ravnsborg agreed in a settlement Thursday with Native American and environmental advocates that the state would never enforce portions of the recently passed laws that criminalize “riot boosting”—which it applied, not just to protesters, but to supporters who encourage but never take part in acts of “force or violence” themselves.

The settlement, which makes permanent a temporary ruling issued by a federal judge in September, has immediate implications for opponents of the Keystone pipeline in South Dakota and could challenge the validity of similar laws targeting pipeline and environmental protestors in other states.

“People can continue to organize and show up in public places and speak out against these projects without any fear of retribution or being identified as rioters and face potential felonies,” said Dallas Goldtooth, an organizer with the Indigenous Environmental Network and a plaintiff in the lawsuit that challenged the rules.

“I think it’s immense,” he said. “We have legal precedent that is shooting down these anti-protest laws that are being replicated across the country.”

At least seven other states have passed harsh penalties for protesting near oil or gas pipelines or interfering with the infrastructure since the start of the Trump administration, according to the International Center for Not-for-Profit Law, which tracks the legislation. Several of those laws were based on a model bill promoted by the American Legislative Exchange Council, an industry-backed group.

In September, a group of Greenpeace activists in Texas who shut down the Houston Ship Channel by dangling from a bridge became the first group charged under any of the new protest laws.

Read the full story on Inside Climate News.