Skip to content
Ex-convict to mayor of Crooks, SD 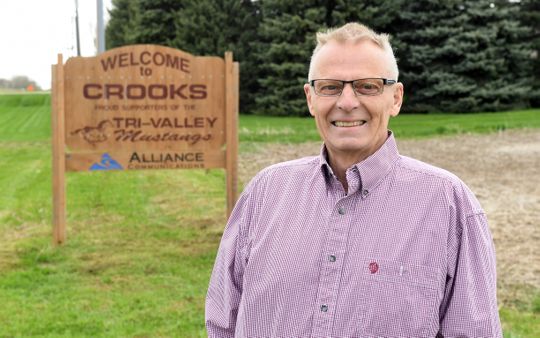 But as the newly elected mayor of this town of 1,300 located just north of Sioux Falls, the 70-year-old wants to focus on the future.

That’s not to say his 25 years of living in Crooks hasn’t been eventful.

During that time, he was convicted and sentenced for a federal crime, lived in his lumberyard office with no running water and survived a rare adrenal cancer, for which he is still being treated. Through everything, he said, the people of Crooks have been supportive and even part of his triumph.

“When I went through what I went through, it was community folks who lived here then who were my support,” Oseby told the Argus Leader. “It’s the new people. Some were understanding. Some weren’t.”

His 2019 mayoral bid recycled past turmoil in a way he wasn’t expecting.

Oseby successfully submitted his petition for mayor on Feb. 22. He was campaigning until a citizen emailed the city’s finance manager March 11 raising concerns about Oseby’s decades-old criminal conviction and his eligibility to run for elected office.

Oseby was charged in February 1997 with paying a gratuity to a public official. Federal prosecutors said Oseby purchased surplus government equipment obtained by tribes that they were unable to use and sold the property at a profit.

In July 1998, his 20-month federal sentence was reversed and remanded to district court, and he was sentenced to spend about 11 months in federal prison, followed by a few months at a halfway house. He was released in November 1998.

He spent his time in prison, paid his $35,000 in restitution off early and restarted his life. But he knew his record would resurface when he decided to run for mayor.

“With (running) comes my past of 25 years ago and do I want to relive that?” said Oseby, who was born in Volga and graduated from Brookings High School. “It was a big decision. I decided I could handle it. These are the people that supported me. This is my hometown, as far as I’m concerned. If it wasn’t for the people 25 years ago, I don’t think I could have made it.”

On March 22, Oseby received a letter from the city’s finance officer, saying that “no mechanism exists in South Dakota which might have restored your civil rights absent a presidential pardon.” The letter concluded that Oseby wasn’t eligible to run for office.

Oseby filed a writ of mandamus — a request for a court order to a government to perform its duties — saying that not allowing him to run for mayor would be a “deprivation of (his) civil rights.” He also said he should be allowed to run to “preserve the right of voters of the City of Crooks to choose their Mayor.”

The main argument, though, was whether a city finance officer has the authority to determine whether he was eligible to run.

Oseby argued that the Minnehaha County Auditor’s office restored his right to vote in October 2008 and he has since voted in at least eight local elections.

In court briefs, Crooks responded that the city’s finance officer had the authority to determine whether Oseby met the eligibility criteria and concluded he didn’t because of his past conviction. The city also argued the finance director had the authority to determine whether a candidate was a “qualified voter” rather than a “registered voter,” though no specific statute was cited.

Oseby’s attorney, Thomas Wilka of Sioux Falls, said he didn’t think that argument would be supported by South Dakota law.

“My initial instinct was just this didn’t sound right,” Wilka said. “Your rights are restored whether you are a state or a federal felon (when the sentence is complete). (Oseby) had re-registered to vote.”

A judge ultimately determined that the county auditor trumps a city finance director when it comes to someone’s eligibility to vote and run for office under South Dakota law.

Second Circuit Court Judge Camela Theeler said in an order granting Oseby’s request that Oseby “does have a clear legal right to have his nominating petitions accepted and appear on the mayoral ballot,” and said the city finance officer “has the obligation to perform that duty.”

Oseby’s name was back on the ballot, and he won the April 30 special election against incumbent mayor Jamison Rounds by 62 votes: 273 to 211.

“At this time, it is what it is,” Rounds said of the recent results. “We do the best we can moving forward. Right now we’re making sure everything is in order to make sure the transition is smooth.”

Rounds, who had been mayor since 2015, posted on his Facebook page before the election, saying, “the issue of candidate eligibility lies with the city finance officer and I accept his decision.”

After the election, he posted to his Facebook page: “I congratulate Butch on his win. I wish nothing but the best for this community! I trust that working together we can make Crooks even better.”

He said that the town has “a lot of great things happening,” and “we want to see the town continue to improve and keep getting better.”

When Oseby is asked about what happened leading up to the election, he quickly diverts to focusing on the future. He doesn’t want negative headlines associated with his town, he said, a place he is proud to call home.

He’s looking forward to being sworn in as mayor at an upcoming City Council meeting. He wants to be a leader in building a new elementary school and finish the town’s housing development. He’s supportive of a new rec center, but wants to make sure the city has the funds to pay for it first. He hopes to have a town square and make downtown Crooks more of a destination for businesses or apartments.

“We need more rooftops, more houses, need to get our tax base up and get some commercial economic development going,” he said. “We’re kind of a hidden gem out here. How do we get ready for the boom? How do we grow and get the amenities and pay for them? There’s a balancing act there.”

When Oseby completed his federal sentence, he didn’t have much.

He had to sell his house to pay for an attorney, so when he was released, he lived in the lumberyard in Crooks for about a year. He had to use a forklift to get water from across the street. If he needed to use a bathroom, it was at the town grocery store.

“I was broke. I moved into the lumberyard, just me and my dog,” Oseby said. “I had two walls that were black plastic and I had a space heater.”

Oseby turned 70 in March. Five years ago, he didn’t think he’d be alive to reach that milestone.

He had started feeling ill around 2010. Doctors couldn’t figure out what was causing his issues, Oseby said, until one found a spot on a scan in 2014.

Oseby had a tumor on his adrenal gland. Within hours of finding the spot, he was in surgery. He was diagnosed with the adrenal cancer in February 2014, and he was told he may have three to six months to live.

Luckily, Oseby said, his oncologist at the Mayo Clinic had seen this type of cancer before and was able to help with treatment.

“There’s not a clear medical reason why I’m here,” Oseby said. “I’ve just been blessed. A year ago I couldn’t have done what I’m doing now. Don’t give up and keep going and be thankful and give back.”

It was only recently he felt healthy enough to make the run for mayor. Each year after the surgery he gained back a bit more strength.

Oseby still goes for cancer treatment about every six months at the Mayo Clinic and said he thinks he’s healthy and ready for office.

He has no hard feelings about anyone involved in the other side of the election, he said. He just wants to move forward.