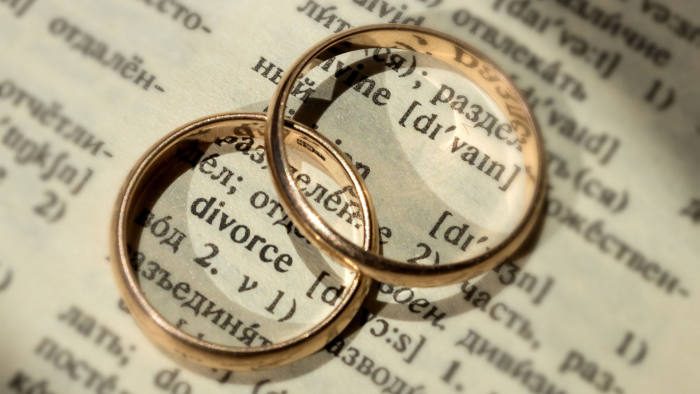 Couples will be able to cut their legal costs and split up faster under historic reforms to divorce laws in England and Wales introduced this week.

Would-be divorcees have previously had to prove their partner is at fault through adultery, desertion or unreasonable behaviour, or if both sides agree, they can part after two years of separation. In the absence of consent or evidence of fault, applicants have had to have lived apart for five years before being able to split legally.

The changes to the rules will keep “irretrievable breakdown” as sole grounds for divorce but, rather than providing evidence of behaviour or separation, spouses will be required to make a statement that the marriage has broken down. The right to contest a divorce will be scrapped.

Sarah Coles, personal finance analyst at Hargreaves Lansdown, said the changes to the rules would help many couples reduce the costs of getting divorced. “If you thought getting married was impossibly expensive, you should try getting divorced. Technically, you can untie the knot for under £1,000, but when you take two angry people, and pit them against one another, the legal bills alone can easily spiral to £30,000 or more.” Setting couples against one another in a blame game creates a needlessly confrontational approach which can push up costs. “This not only causes enormous distress for the couple and any children, but the current system could almost have been designed to create needless financial dramas,” said Ms Coles. The fault-finding imperative can encourage each spouse to punish the other throughout the rest of the process — including in the financial settlement. Katy Daly, co-founder of Amicable, a divorce services company that helps couples separate, said: “Finding fault makes divorcing harder, slower and more expensive, damaging outcomes for families after divorce and add huge expense to taxpayers,” she said, referring to court costs. As well as costs resulting from legal fees, long periods of separation for two or five years can carry financial consequences of their own. In most cases spouses can struggle to buy another property until the divorce, because both people are still named on the mortgage of the family home. In others, they may be forced to live together while waiting for a divorce, if living separately is unaffordable. Those can afford to live apart — and buy another property — can run into financial obstacles. If one person in the couple buys another home before the divorce comes through, it will be treated for tax purposes as a second home and will incur an additional rate of stamp duty land tax. The purchaser may claim a refund on the extra stamp duty if they relinquish any ownership stake in the old family home within 36 months of the divorce settlement. But experts say the process can create cash flow problems. If the divorce takes place in a different tax year from the separation, this can create additional tax issues. In a new tax year, transfers of assets will potentially become liable to capital gains tax. The exception to this is the family home, because couples have three years to sell or transfer that after the split. While lawyers and advisers agreed that the introduction of a “no-fault divorce” law will be good for divorcing couples, some called for them to be extended further, to cohabitating couples. Ros Bever, national head of family law at Irwin Mitchell Private Wealth, said: “Cohabitees, the fastest-growing household type, have no law whatsoever protecting them or structuring proceedings upon relationship breakdown or death. No-fault divorce is a move which, while welcome, is not something which is going to hugely benefit those facing financial hardship such as cohabitants, and that is where the focus should be now.”